Tenshin Shōden Katori Shintō-ryū is a purely martial art with a history of 600 years.

In modern times (April 1960) it has been characterized as cultural heritage of the Chiba prefecture and of Japan. It is the only art in Japan to receive such a title. Teachers and students of Katori Shintō-ryū (katorika) are considered as the safe keepers of tradition. It is characterized by the Keppan (oath of blood) which is compulsory for anyone who wishes to practice the art.

In contrast to modern martial arts, it offers a spherical training on all battle styles and for this it is being called bugei juhappan (18 categories of martial arts) or else, total study of martial arts.

Katori Shintō-ryū teaches kenjutsu (sword), iaijutsu (sword drawing), bojutsu (staff), sojutsu (spear), jujutsu (unarmed combat), naginata (type of spear), shurikenjutsu (blade throwing). Also there is reference and training in sciences of war sich as chikujojutsu (castle or field fortification), gunbaiho (strategy), tenmon chiri (topography and use of stars for direction). Given the wide range of study regarding war and its practices, Katori Shintō-ryū is considered the pinnacle of Japanese tradition.

In the battlefields of past centuries, warriors wore armor and fought with spears. If the spear broke, they had to draw their swords. In case they lost the sword, they went directly to unarmed combat until they were able to find a new weapon. It is clear thus, that the teaching of one, single martial art (swords, spears or unarmed) was at least insufficient in the battle field, where a combined knowledge of martial arts was needed! This combined knowledge is in effect the teaching and content of the art of Katori Shintō-ryū.

*Check here, the official website of Katori in Japan. 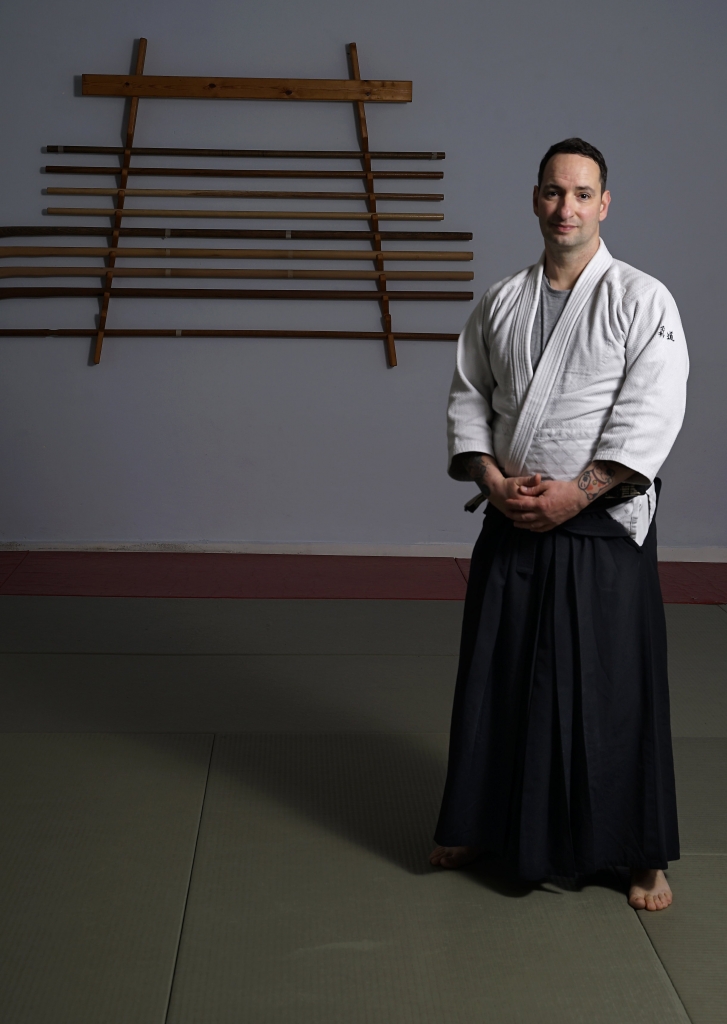 Read more about the sensei

Panagiotis Agrios was born in Athens in 1975. From a young age he started playing sports
by boxing, while his first contact with the field of martial arts was with judo at the age of 17.
Athlete of the Panhellenic Gymnastics Club, he studied with Athanasios Kaparos.

After completing his studies in the preservation of antiquities and completing his military
service, he began to engage in the art of Aikido. The difference of aikido in relation to what
he had done so far, leads him to practice intensively with it. Shortly before becoming the
holder of the black belt, he makes his first trip to Japan and remains an in-house student of
Kazuo Igarashi Sensei. Returning to Greece, he has already realized how crucial it was for
this trip and decides that he wants to pursue Aikido professionally.

At the same time he learns the Japanese language in order to get closer to the Japanese
culture and next year he visits Japan again. Knowing Japanese culture better, he focuses
his efforts on getting in touch and becoming a student of the oldest Japanese fencing
school, the Katori shinto ryu. Finally, after years of efforts, he finally manages to start his
apprenticeship under the supervision of Erik Louw Menkyo katori, Holland shidosha, with
whom our school is directly connected with Otake Risuke sensei, the only representative
of art today.

In October 2014 in Amsterdam, the Netherlands, in the presence of Nobutoshi Otake
sensei, he took the traditional keppan blood oath and now officially belongs to the Katori
shinto ryu family.
Since then until today he deals with Aikido attending seminars by teachers from abroad,
teaching at the school of Aikido Bushido Center.

He holds the rank of 5th Dan in Aikido, 1st Dan in Judo and 1st Dan jiu jitsu. He is a
certified Jiu Jitsu coach by the General Secretariat of Sport and also a certified trainer
(Shidoin).
He also holds the degree of Master Usui Reiki and is an instructor of the voluntary Aikido
learning program of KETHEA in the women’s prisons of Thebes.

Send us a message

This website uses cookies to improve your experience while you navigate through the website. Out of these cookies, the cookies that are categorized as necessary are stored on your browser as they are essential for the working of basic functionalities of the website. We also use third-party cookies that help us analyze and understand how you use this website. These cookies will be stored in your browser only with your consent. You also have the option to opt-out of these cookies. But opting out of some of these cookies may have an effect on your browsing experience.
Necessary Always Enabled
Necessary cookies are absolutely essential for the website to function properly. This category only includes cookies that ensures basic functionalities and security features of the website. These cookies do not store any personal information.
Non-necessary
Any cookies that may not be particularly necessary for the website to function and is used specifically to collect user personal data via analytics, ads, other embedded contents are termed as non-necessary cookies. It is mandatory to procure user consent prior to running these cookies on your website.
SAVE & ACCEPT